In this article, I will tell you the basics of the computer. It’ll help you in the gov and college exams. If you prepare for CCC (Course on The Computer Concept).

Basic Of Computer is also part of the 9th to 12th class.

Computer is a device that transforms data into meaningful information. Data can be anything like marks obtained by us in various subjects. It can also be name, age, sex, weight, height, etc.

Computer can also be defined in terms of functions it can perform. A computer can 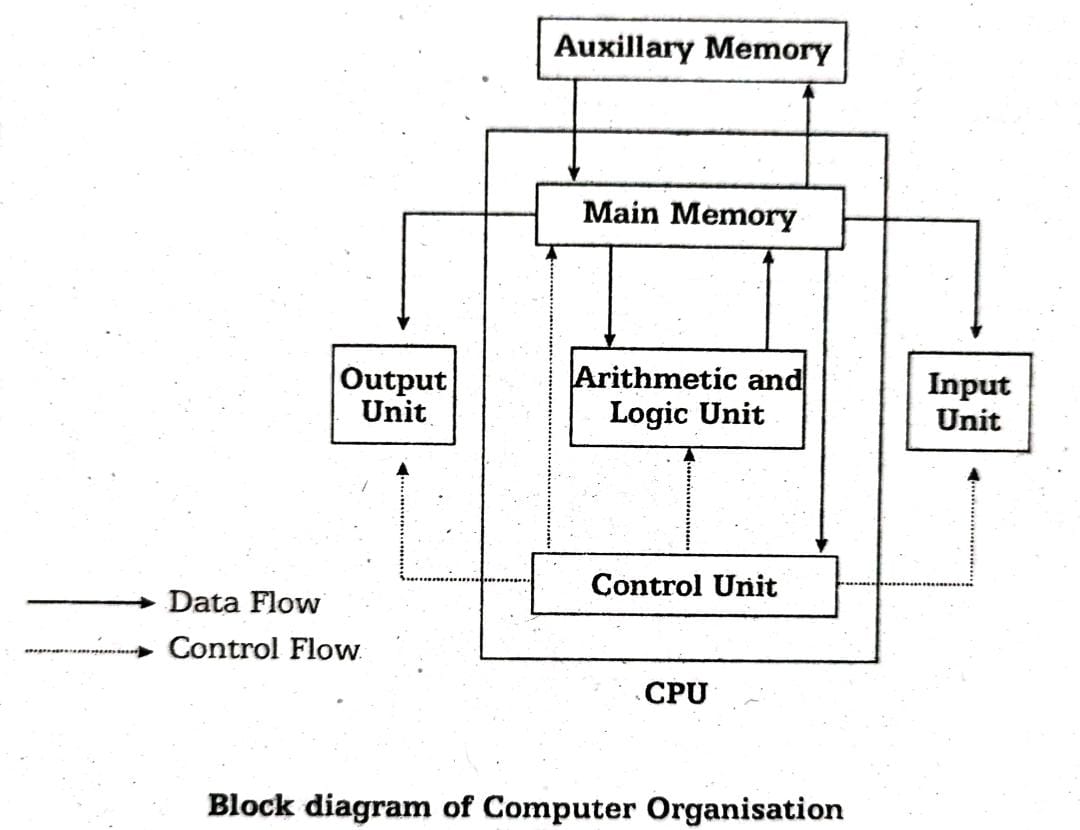 The computer performs basically five major operations of functions irrespective their size and make. They are –
1) It accepts data or instruction by way of input,
2) It stores data,
3) It can process data as required by the user,
4) It gives results in the form of output, and
5) it controls all operations inside a computer.

This is the process of entering data and programs into the computer system.

Memory Unit is used to store data and instructions which was given through input.

ROM – ROM means Read Only Memory. It is a non-volatile memory. Information stored in the memory will not be lost when the power goes off, Writing into ROM is done only once (at the time of manufacturing). We cannot write information in this memory.

EPROM – EPROM means Erasable Programmable Read Only Memory. Unlike ROM PROM information stored in this memory can be erased and rewritten Erasing is done by exposing to ultra violet light for about 20 minutes.

EEPROM – EEPROM means Electrically Erasable Programmable Read Only Memory. Information stored in this memory can be erased electrically and rewritten. After EEPROM is Programmed, we can only read info.

The major operations performed by the ALU are addition, subtraction, multiplication, division, logic and comparison.

This is the process of producing results from the data for getting useful information. The ALU and the CU of a computer system are jointly known as the central processing unit CPU). We may call CPU as the brain of any computer system.

The process of input, output, processing and storage is performed under the supervision of a unit called ‘Control Unit’. It decides when to start receiving data, when to stop it, here to store data, etc. It takes care of step -by-step processing of all operations inside the computer. 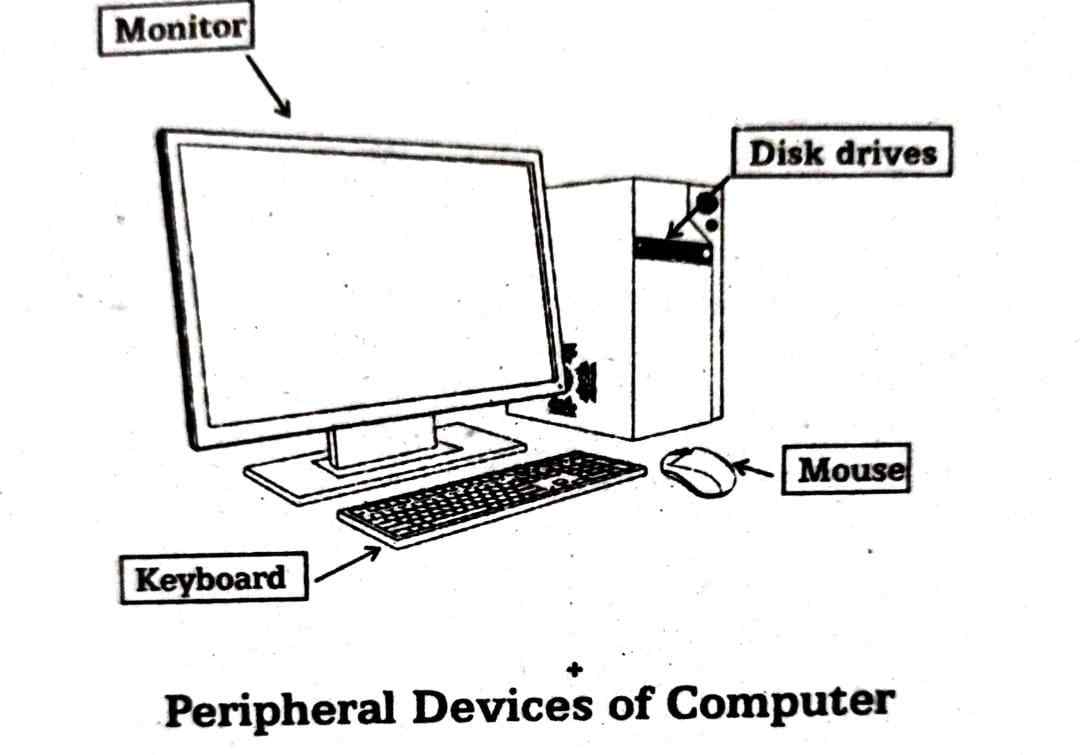 Input devices accept data and instructions from the user. Following are the examples of various input devices, which are connected to the computer for this purpose.

A keyboard is the most common input device. Several kinds of keyboards are available, but they resemble each other with minor variations. The keyboard in most common use is the QWERTY board. Generally standard keyboard has 104 keys. In these keyboards, the cursor control keys are duplicated to allow easier use of the numeric pad.

A mouse is an electro-mechanical, hand-held device. It is used as a pointer. It can perform functions like selecting menu commands, moving icons, resizing windows, starting programs, and choosing options.

The most common mouse uses an internal, magnetically coated ball, to detect the movement of the mouse across a flat surface, usually a desktop. Now a days Optical or laser mouse is used to detect the movement. All windows based applications today are designed to work with a mouse. A mouse is used to replace hard-to-remember key combinations with easier “Point and Click” actions. However, it cannot substitute all keyboard operations. It can be alternative for commands based operations.

These devices are used for automatic data collection. The devices of this category completely eliminate manual input of data. For example, the bar-code reader is actually just a special type of image scanner. An image scanner translates printed images into an electronic format that can be stored in a computer’s memory, and with the right kind of software, one can alter a stored image. Another example of scanner is optical character recognition (OCR) device, used by banks to convert the scanned image of a typed or printed page into textt that can be edited on the computer.

Touch panel displays and pads are now being offered as.alternatives to keyboard. Here the input can be given through the computer screen, that accepts the input through monitor; users touch electronic buttons displayed on the screen or they may use light pen.

Microphone is an input device, which takes voice as input. The voice communication is more error-prone than information through keyboard. There are two types of microphones available

Track ball, a pointing device, is a mouse lying on its back. To move the pointer, we rotate the ball with our thumb, our fingers, or the palm of our hand. There are usually one to three buttons next to the ball, which we use just like mouse buttons.

The advantage of trackballs over mouse is that the trackball is stationary so it does not require much space to use it. In addition, we can place a trackball on any type of surface, including our lap. For both these reasons, trackballs are popular pointing devices for portable Computers.

Output devices return processed data that is information, back to the user. Some of commonly used output devices are:

Two basic types of monitors are used with microcomputers, which are as follows:

CRT or Cathode Ray Tube Monitor is the typical monitor that we see on a desktop computer. It looks a lot like a television screen, and works the same way. This type uses a large vacuum tube, called cathode ray tube (CRT).

This type of monitors are also known as flat panel monitor. Most of these employ liquid crystal displays (LCDs) to render images. These days LCD monitor are very popular.

When people talk about the capabilities of various monitors, one critical statistic is the resolution of the monitor. Most monitors have a resolution of at least 800 x 600 pixels. High-end monitors can have resolutions of 1024 x 768 pixels or even 1280 x 1024 pixels Thus monitors are available either in low resolution or in high resolution.

After a document is created on the computer, it can be sent to a printer for a hard copy (printout). Some printers offer special features such as colored and large page formats. Some of the most commonly used printers are :

An ink-jet printer creates an image directly on paper by spraying ink through as many as 64 tiny nozzles. Although the image it produces is not generally quite as sharp as the output of a laser printer, the quality of ink-jet images is still high.

Typically, an ink-jet printer is more expensive than a dot-matrix printer, but costs only half as much as a laser printer.

A plotter is a special kind of output device that, like a printer, produces images on paper, but does so in a different way. Plotters are designed to produce large drawings or images, such as construction plans for buildings or blueprints for mechanical objects. A plotter can be connected to the port normally used by a printer.

An array of different coloured pens in a clip rack and a robotic arm is part of plotter. The instructions that a plotter receives from a computer consist of a colour, and beginning and ending coordinates for a line. With that information, the plotter picks up the appropriate pen through its arm, positions it at the beginning coordinates drops the pen down to the

surface of the paper and draws to the ending coordinates. Plotters draw curves by creating a sequence of very short straight lines.

Flat Bed: Plotters of small size to be kept on table with restriction of paper size.

Drum : These plotters are of big size using rolls of paper of unlimited length.

Speakers are another type of output device, which allow you to listen to voice like music, and conversation with people.

Conclusion – Hopefully, You like the article about the basics of computers. I tried to explain all theory in the exam points. You must read this, and download it if you like Basic of The Computer. In the Gov exam Group C exam, These types are questions are most important.