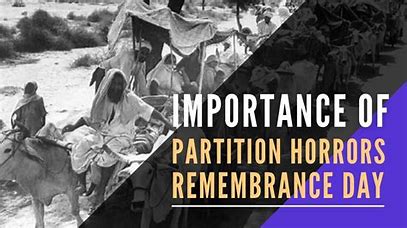 Recently, the Central Government announced to celebrate as’ Partition Horrors Remembrance Day) on August 14th, i.e. August 14th before Independence Day. On this occasion, the Prime Minister tweeted “The pain of sharing of the country can never be forgotten.

Due to hatred and violence, our millions of sisters and brothers had to be displaced and lost to their lives. This day we discriminate, validity and malice Not only will motivate the poison to eliminate, but it will also strengthen unity, social harmony and human senses.

The law created on the basis of India’s Mountbattan scheme has been made according to the Indian Independence Act 1947. It was said in the Act that on August 15, 1947, two countries called India and Pakistan will be made and the British government will hand over them. With this, the Indian Union was established on August 14 on August 14. Crores of people were affected by the partition of India.

About 10 lakh people were killed in the violence during the partition and about 1.45 crore refugees left their homes and took refuge in the majority community. On the basis of religion, the splendor of this split is still facing both the countries.